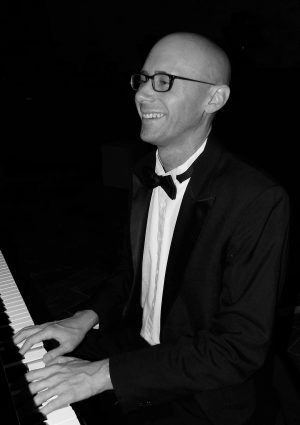 Austin Haller is an organist, pianist, conductor, vocal coach, and arranger who can be heard in Texas and beyond. Hailed as “always remarkable” (Austin Chronicle), he is delighted to make music with Conspirare.

He serves as Organist for the Austin Symphony and as Principal Organist at St. Martin’s Lutheran Church in Austin, and he has led hymn festivals and presented solo organ concerts throughout the southern United States. He has performed with the Grammy®-winning vocal ensemble Roomful of Teeth, and he makes music regularly with a number of Central Texas-based choral ensembles, including Inversion Ensemble, Panoramic Voices, Amphion Choirs, and illumine.

Austin’s musical theatre music direction “produces a gloriously rich choral sound full of exquisite harmonies” (Broadway World), and he is the grateful recipient of Austin Critics’ Table and B. Iden Payne Awards for Music Direction. He has performed with Broadway stars Rebecca Luker, John Bolton, Paige Davis, Kissy Simmons, Natalie Douglas, and many more, and his “fierce piano stylings” (Austin Chronicle) are frequently heard with Broadway performers at Austin Cabaret Theatre. He also serves as music director for Austin Shakespeare’s cabaret series at Parker Jazz Club – its production of A Little Night Music was praised by the Austin American-Statesman as a “fresh twist on cabaret theater (that) attained almost instant perfection.”