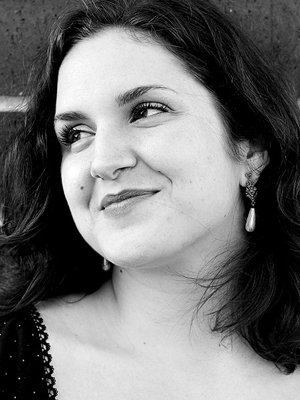 Praised for her “clear, bright voice” (New York Times) and “artistry that belies her young years” (Kansas City Metropolis), soprano Estelí Gomez is quickly gaining recognition as a stylish interpreter of early and contemporary repertoires. In January 2014 she was awarded a Grammy with contemporary octet Roomful of Teeth, for best chamber music/small ensemble performance; in November 2011 she received first prize in the Canticum Gaudium International Early Music Vocal Competition in Poznan, Poland.

Estelí can be heard on the soundtrack of Lena Dunham’s 2022 film Catherine, Called Birdy, Seattle Symphony’s 2017 recording of Nielsen’s Symphony No. 3, on the first track of Silkroad Ensemble’s Grammy-winning 2016 album Sing Me Home, and on Roomful of Teeth’s self-titled debut album, for which composer Caroline Shaw’s Partita was awarded the 2013 Pulitzer Prize.

Highlights of the 2022-23 season include: performances with the NY Philharmonic and Roomful of Teeth in the new David Geffen Hall; recording a Spanish translation of Handel’s Messiah with Bach Collegium San Diego; the world premiere of chamber opera Dreams Have No Borders in Ashland, OR; solo appearances with A Far Cry, Madison Bach Musicians, Westminster Choir College, Jacksonville Symphony Orchestra, Piffaro, and iSing Silicon Valley; teaching residencies at University of Oregon and Oregon Bach Festival; and concerts at Lincoln Center and the Baryshnikov Arts Center, with additional tours throughout Europe and Portugal, with Roomful of Teeth. Roomful’s third studio album, Rough Magic, will be released in early 2023.

Originally from Watsonville, California, Estelí received her Bachelor of Arts with honors in music from Yale College, and Master of Music from McGill University, studying with Sanford Sylvan.

Estelí is thrilled to be teaching at Lawrence University as assistant professor of voice, in addition to continuing her work as a performer. She is also a proud member of Beyond Artists, a coalition of artists who donate a percentage of their concert fees to organizations they care about. She is currently donating to RAICES and the Texas Civil Rights Project.