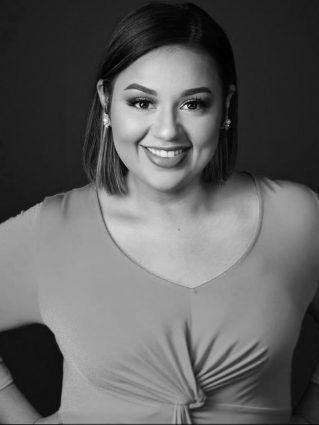 Soprano, Ivy Cantu received her degree in, Vocal Performance at Texas State University. Her roles include, Reporter in Ruffled Flourishes (world premiere), Venus/Juno in Orpheus and the Underworld, L’écureuil in L’entfant et Les Sortilleges, Lady Bird in Lady Bird: First Lady of the Land (world premiere), Mrs. Grose in The Turn of the Screw, Mother in Hansel and Gretel, 1st Lady in The Magic Flute, Mrs. Gleaton in Susannah, Queen Dido in Dido and Aeneas, and a soloist in Howl (world premiere). She made her debut with Alamo City Opera in their production of Maria de Buenos Aires (2016),Texas Concert Opera Collective in their production of Susannah as Mrs. Gleaton (2019), Austin Opera in their production of Everest (2019), and Local Opera Local Artists (LOLA) in Dido and Aeneas as the lead, Queen Dido (2019).

She won first place in the Edward Baird Singer of the Year competition at Texoma NATS (2018) and third place in the Meistersinger Competition at AIMS in Graz, Austria (2019). She was recently invited to be an Emerging Artist for the Victoria Bach Festival (2022).

Miss Cantu is an active chorister with Austin Opera and Opera San Antonio.